Why Does it Cost Money to Recycle? 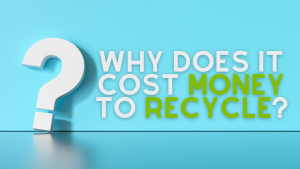 The question of why recycling doesn’t pay for itself is one we hear a lot. And, it’s understandable. We know that recycling bottles, cans, cardboard, and other materials ultimately results in those items getting back into the economy as valuable products—paper towels, aluminum siding, carpet, and more.

And we understand that in most cases, using feedstock from recycled materials is much better for the environment than harvesting virgin materials from the earth like mining bauxite ore to produce aluminum or harvesting trees to make paper. Plus, recycling avoids the environmental and economic costs of landfilling or incinerating those materials.

When you just consider the empty container or flattened box and jump to its new life as a polo shirt or newspaper, it’s difficult to grasp why it costs to recycle. But, when you make that leap from recyclable to a new product, you’re ignoring all of the factors and processes that go into getting it from the recycling bin to the store shelf.

Buildings, Equipment, and People
Collecting, sorting, baling, marketing, and shipping recyclables requires a great deal more effort and cost than simply picking up the trash in a neighborhood and delivering it to a landfill or incinerator. Recyclers often use different trucks to service their recycling customers—those trucks require drivers, maintenance, fuel, and insurance just like the ones picking up garbage. The recycling trucks then deliver the recyclables to be sorted and baled at a materials recovery facility or MRF (pronounced “merf”).

MRFs are highly specialized and technical operations where conveyors, tumblers, air jets, optical sorters, and people work as a system to group each type of material together into large bales that can be shipped to buyers near and far. (Take a virtual tour of Ray’s MRF, located on the west side of Indianapolis.) These sorting facilities are complex operations that, like the recycling trucks, require a lot of maintenance and power to run; not to mention the cost of insurance and staffing.

Contamination
In a perfect world, only recyclables would be placed in recycling bins and we wouldn’t have to discuss contamination as a huge cost associated with recycling. Contamination is anything placed in a recycling bin that isn’t accepted in the recycling program. Common contaminants include plastic shopping bags; plastics that aren’t bottles, jugs or tubs; scrap metal; hoses; electronics; and more. Some of these items are very recyclable, but only in programs specifically designed to accept them. As contaminants move through the sorting system, many of them become tangled in and wrapped around the gears, rollers, and other equipment (think of a doll’s hair in the vacuum cleaner…). Ultimately, the entire system has to be shut down so the tangled hoses, bags, rope, and strings of lights can be removed. These shutdowns, sometimes occurring multiple times per shift, slow down the process and eat up critical labor hours.

Market Pricing, Global Changes, Pandemics, and the Bottom Line
Entire articles have been written about each of the topics we’re going to cover next. Suffice it to say that global and regional economics play a significant role in recyclers being able to sell the materials they collect, sort, and bale. And, the markets for these materials—really commodities at this point—are always fluctuating due to forces beyond a recycler’s control.

In 2018, China implemented a policy that shook the foundation of recycling around the world. Prior to the “National Sword,” China was the leading importer (buyer) of waste from around the world and had been for decades. The new policy, rightfully, banned shipments of waste from other countries; China was no longer going to be the dumping ground for dirty, unsorted “recyclables” from the United States or anywhere else. This policy change had an enormous impact on the economics of recycling, especially on the US coasts. A report by The Recycling Partnership, a national non-profit focused on improving recycling in the U.S., explains that in the spring of 2017, the total market value of all single-family curbside recycling materials across the United States was $5.3 billion. In November 2019, that value had been slashed nearly in half to $2.7 billion.

While the values of many commodities have dipped, clearly substantial markets (nearly $3B markets!) exist for these materials. Midwest recyclers didn’t sell the lion’s share of their material overseas before the National Sword. So presumably, the direct impact on them has been lessened. They’re still selling their baled recyclables to many of the same domestic buyers as before. But, so are many other recyclers that may have shipped those materials overseas prior to 2018.

This all demonstrates that while recycling collection is inherently a local activity, many of the forces that determine the value of the recyclables and profitability of our local recyclers are global. To be successful long-term, recyclers have to be able to maintain recycling programs when factors outside their control come to bear on their bottom lines.

Recycling in Hendricks County does not happen without local recycling companies. They are part of our community and deserve our support. They employ our neighbors, pay taxes that support our shared infrastructure, give to local non-profits we cherish, and buy supplies, equipment, and services from other local businesses.

As consumers, we make buying choices every day and often pay extra for service and convenience. Opting to recycle right and subscribe to curbside recycling is no different. Most households in Hendricks County don’t think twice about paying to have a service come to their house weekly and pick up their trash. But some balk at the idea of paying to recycle. Recycling curbside is really no different than residential trash service (except that it’s less expensive at around $10 per month!).

WM (formerly Ray’s Trash) and Republic Services both offer curbside recycling service to most of Hendricks County. Households and small businesses located in Avon, Brownsburg, Clayton, Danville, Pittsboro, and Plainfield can subscribe. Both companies accept essentially the same items in their programs (but please read and follow their recycling rules). Subscribers received a 96-gallon rolling tote with a lid that will be picked up every other week.

Consider contacting either company today and setting up service. You’ll support a local recycling company, keep trash out of the landfill, and you’ll be recycling right!

You have Successfully Subscribed!